guidedbyvoices wrote:beautiful trailer, I would go to that play if I could........

Were we watching the same thing?!? The music was OK and OK at best, the trailer was kind of boring although I liked the face popping up. But...girl sat on swing...disappears...my interest has now disappeared also.

I hope I'm wrong because I've been looking forward to this since it was announced. I'll wait to hear the FULL album, if indeed they release one.

I don't want to give anything away...so I won't talk about the show itself - other than to say it is bonkers, at times a glorious assault on the senses, quite surreal, funny at times and is a wonderful blend of old and new. It's really quite loosely based on Alice in Wonderland, but all of the key references are there.

Damon's music was perfect. There are moments of real beautiful melody...the music twists and turns all over the place, from bonkers incidental video game bleeps and beats, to woozy and wonky electronica and, mostly of course, classic and ornately arranged music hall. Gorgeous arrangements - with strings, banjo, flutes etc. I lost count of the amount of times my co-attendee and I looked at each and said "very Damon!" during certain moments. You'll hear it for yourself. He's managed to create what is essentially a classic musical score and interspersed it with modern sounds and interludes...and all the time it's very Damon and always very musical theatre. BRAVO DAMON!
Twitter: @shornKOOMINS
Top

Also forgot to mention - not being a regular theatre goer I have no idea if this is the done thing - but the director Rufus Norris came on stage before it started to appeal for patience and generosity in the event of a fuck up or whatever, saying it was a tall order to get it ready, possible first night hiccups etc. I read somewhere Damon was immensely depressed and terrified about 3-4 days ago - which is mental - before having what he called "a breakthrough" the next day. It's mad how late these productions come together.

Anyway there were no fuck ups apart from one very very close and excruciating moment when one of the giant set features almost toppled over onto some of the cast. They just rescued it.
Twitter: @shornKOOMINS
Top

Damon was in attendance... 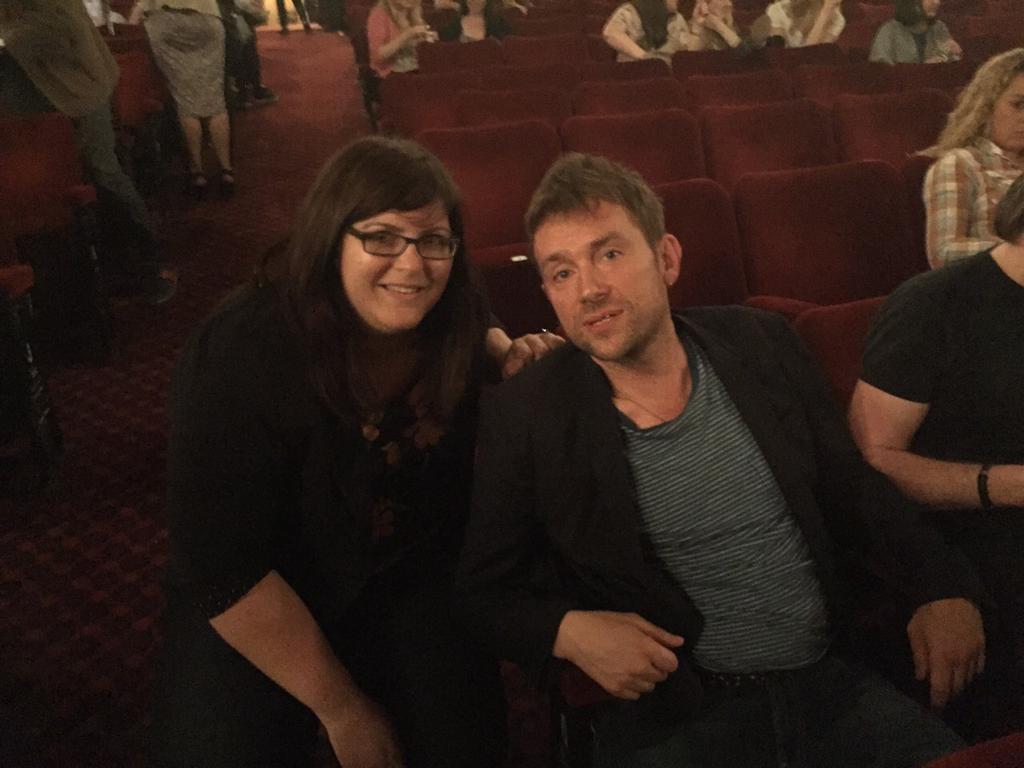 I love Damon
Textin' abbreviates the brain. Aspirin takes away the pain.
Top

Thanks for the report Sean - looking forward to it.
Top

Damon: "I've seen a lot of things 'in quotes' that weren't necassary"

they would compare her to lilies, and she had to go to parties, and london was so dreary
Top damon did a little acoustic set at the after party: hong kong, hostiles (he had to start the song twice

) and the universal.
Dave was there and transmited the whole thing on periscope. >> https://www.periscope.tv/w/aGWweDMzNTE0 ... HUoICx6g==" onclick="window.open(this.href);return false;

Can anyone rip the acoustic set? It's the first time The Universal's been played by Damon, isn't it?
Top